It's that time of the year again, guys! After an extremely, extremely successful EH 08, we will once again be "hosting" Earth Hour.

On March 28, 8:30pm your timezone, wherever you live on planet earth, simply switch off your lights for one hour!


Hope you will participate!!

I have no doubt, the first Earth Hour was a good opportunity to draw attention to the need for energy efficiency.. But then somehow I think that the spread of Earth Hour derivative events have turned it into an excuse for people to feel good about suspending their bad consumption habits for an hour, then starting them up again.. :( *sigh*

This year, beside turning our lights off for an hour, how about we also use Earth Hour as an opportunity to make a permanent change to our energy consumption habits. It's not gonna be easy.. But we can at least try.. Earth loves us sooo much, let's love it back a lil bit more.. ;)

Posted by nisaalattas at 10:51 PM 1 comments

Posted by nisaalattas at 12:02 AM 2 comments

5. He says: "Here's an idea: Why don't I just meet you at the restaurant?"
He means: "I'm not gonna pull out all the stops just yet, so I'm not picking you up at your place."

7. He says: "How long was your last relationship?"
He means: "Are you up for a fling or looking for something long-term?"

8. He says: "I'm still getting over a breakup."
He means: "I plan to get over my breakup by dating lots of chicks."

10. He says: "I'll call you later."
He means: "I may or may not call you at some point between now and three months from now."

12. He says: "I'm not good at relationships."
He means: "I don't think you're important enough for me to put in much effort."

13. He says: "Let's not rush into things."
He means: "I'm still deciding whether you're girlfriend material."

15. He says: "My family has been asking about you."
He means: "We are definitely a couple."

17. He says: "He seems like a good friend of yours."
He means: "Was there ever a thing between you?"

22. He says: "Seems like a lot of your friends are starting to get married and have kids."
He means: "Uh-oh, you're going to start freaking out soon."

26. He says: "I don't get why girls like him."
He means: "I'm feeling insecure, so say something reassuring."

48. He says: "I want to watch you touch yourself."
He means: "I am having trouble figuring you out and need pointers."

50. He says: "You've never done that before--where did you learn it?"
He means: "Have you been hooking up with other dudes?"


Hate to admit, but I think most of them are trueeeee!!!

Posted by nisaalattas at 3:31 PM 0 comments

It's almost like you had it planned
It's like you smiled and shook my hand and said
"Hey, I'm about to screw you over big time"
And what was I supposed to do?
I was stuck in between you and hard place
We won't talk about the hard place

But I don't blame you anymore
That's too much pain to store
It left me half dead
Inside my head
And boy, looking back I see
I'm not the girl I used to be
When I lost my mind
It saved my life

Cause I don't blame you anymore
That's too much pain to store
It left me half dead
Inside my head
And boy, looking back I see
I'm not the girl I used to be
When I lost my mind
It saved my life

Cause I don't blame you anymore
That's too much pain to store
It left me half dead
Inside my head
And boy, looking back I see
I'm not the girl I used to be
When I lost my mind
It saved my life


There is definitely no other song that can possibly describe it all as perfect as this one, don't you think?

ps. I HEART Mozella so so so so MUCH.. Her voice simply blows my mind!!!!

Posted by nisaalattas at 4:46 PM 0 comments 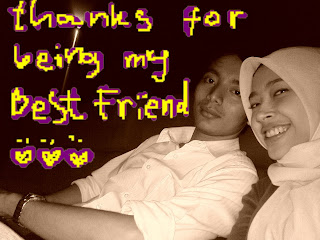 Love you so much, best friend!! *hugs*

Posted by nisaalattas at 12:24 AM 7 comments


That was one of my favorite songs as a kid.. Damn I'm getting more and more disturbed seeing children singing adult songs these days. The time will come, Kiddos, when you can sing any song about love (between a man and a woman), cheating, heartbreak, separation, you name it. Trust me, the time will eventually come. Until then, can you please pick another song that's much more appropriate for your age, Sweeties?? Mommies, Daddies, Nannies, anyone out there.. can you help them out??? THANK YOU!

Posted by nisaalattas at 11:25 PM 0 comments